Not sure if I mentioned to you all that we had signed up to raise another Canine Companions For Independence (CCI) dog.  I think I did but in case this is the first you’ve heard let me get you up to speed! 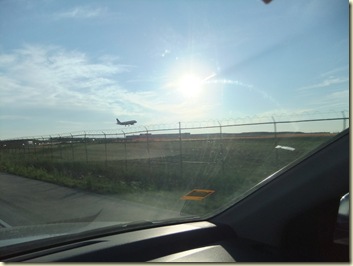 When Einstein graduated last May we knew we wanted to raise another puppy right away.  We missed…err I missed having a CCI dog around!  So once home after graduation I sent in my application with a note that we’d be ready once we returned from a vacation in July.

Aha!! That’s why you haven’t heard from me!  I know, I thought about posting some entries from vacation but I neglected to bring my laptop with me.  So there you go…I’m going to have to do some back story entries to catch you all up!  I’ve been waiting all week to share this with you!

Last evening we drove to O’Hare airport about 7pm.  Our new puppy, named Jamba, was arriving along with his brother Jammer, via Delta Air Cargo.  If any of you know about air freight shipping then you’ll also know that you have to find the cargo terminal within the airport compound and weave your way along the back roads to arrive at your destination.  This was certainly true with Delta and O’Hare, one of the largest and busiest airports in the world.

We arrived just after the pups had reached the gate.  There was a buzz of excitement going on behind the counter and we soon were told the pups/kennel was being ‘cleaned’ up.  Oops, there had been a natural occurring bodily function with one or two of the pups and lets just say the Delta crew wasn’t in the mood to be lifting a crate covered in well…you know…stinky, smelly…

Then the pups were brought out by the clean up crew and we had our first look at Jamba and Jammer! 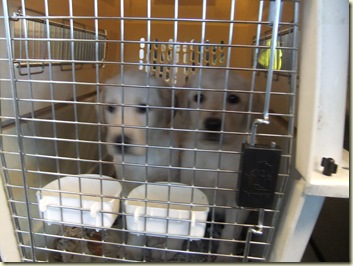 The photo is a little fuzzy, things were shaking, and too much was going on!

Jim brought out the crate to the cars and we opened up the kennel to figure out who was who!

Here’s the tag on the front of the kennel! 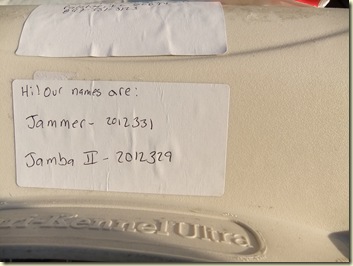 Each pup has a unique serial number tattooed inside their ear.  Jammer’s Puppy Raiser also was there to pick him up so we each grabbed a pup and started to check for the tattoos!

I was trying to read the numbers on the squirmy little guy and before I could I heard “Okay, let’s switch, I’ve got Jamba!”.

We said goodbye to Jammer and then drove home. 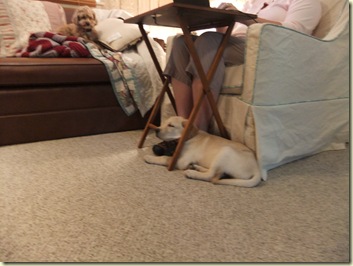 It was a long night for us lbut Jamba finally settled in after a few hours.

For the next few weeks our first priority is housetraining.  Jamba has already made a few mistakes, which is expected, but he is learning very quickly to go to the back door (noted by two deposits he put there because we couldn’t get him out quick enough).  We think he’ll be a breeze with this first lesson.

What a cutie!  We love him already!