Oh!  This project is really getting exciting!  Yesterday I went back to Hancock Fabrics to see about getting more supplies for this project.  It is a little bit of a hike to get to their store but I knew they’d have a few of the things I was looking for…and I have coupons so good deal all around – he he!

I was specifically looking for a sleeve/pocket lining fabric, bungee cord clamp thingy’s, that bungee elastic stuff, more zippers and matching thread for the fleece.

The list grew quite a bit but that didn’t happen on it’s own.  We FOUND the inspiration jacket we were looking for.  The inspiration is the North Face Denali Men’s Fleece Jacket and you just would not believe the price.  Here are some photos of this jacket with some surprising details… 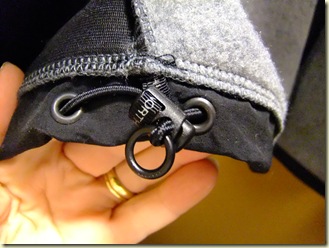 Here is that bungee elastic cord, and bungee cord keeper thingy I mentioned earlier.  Gosh, I just don’t know what the proper terms to use here for these.  I promise I’ll get the right words for future posts but for now its called the bungee cord keeper thingy.  On the North Face brand the cord comes out of the bottom jacket hem through two grommets and there is an O ring looped as a stop measure.  That’s so the cord won’t accidentally come out!  Ingenious. 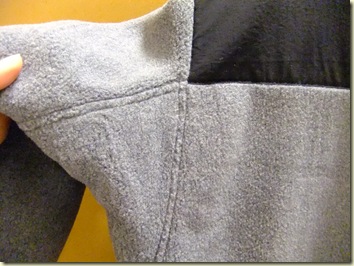 There is a gusset in the sleeve (see below) that I didn’t expect, but makes perfect sense when you think about this piece of clothing being a performance garment.  The fleece is SUPER Plush, much, much plusher than what I could find and ended up getting at Hancock.

I believe this really plush fleece is called Polartec 300.  In contrast, the Hancock fleece is called Anti-Pill Fireside Fleece and if I had to grade the fireside version for plushness I’d put it somewhere in mid-weights.

Here’s a photo of the underarm Pit-Zips, as Jim calls them.  Incidentally, I do own a few parkas with this feature and Jim has several jackets that incorporate this same cooling/air-flow design.  The Kwik Sew pattern does not include Pit-Zips nor the gusset so I’m going to have some work with that re-design.  It looks fairly straight forward though, so no worries just yet.

There are 4 zipper pockets on the front of the jacket with the two side/hand pockets inserted on an angle.  I tried the jacket on and those side pockets are aligned just perfectly to the angle of your arm, very nice!  I can really tell there was some thought to that.

The two upper chest pockets are smaller but one more than the Kwik Sew.

The sleeves are finished off using a lycra spandex.  Jim has a jacket using that technique and it looks really easy to do, much like a bias binding for a quilt edge.  Here’s a closer look at that…

There are some gross-grain ‘sysytem’ tabs on the sleeves, which are used to hook into parkas.  In other words, this fleece jacket can be used to line a parka shell for added warmth.  I don’t need to add that feature as Jim doesn’t have any North Face parkas, but instead I plan on adding a small gross-grain plain loop.  That would work for some of his other jackets made by other brands (those have the clips on the parkas – not the fleece).

There is one more feature that we are adding that is NOT part of the North Face version and that is to line the sleeves.  Jim has a Columbia brand jacket with lined sleeves and he really likes being able to easily get his arms in and out.  It also adds some warmth too as it adds just one more layer for stopping the wind!

In addition, as if there’s not enough here, I’m also going to try a gross-grain ribbon finish across the neck band.  It will be a ‘ we’ll see how that goes’ experience but it looks really nice on the Columbia jacket Jim has so it might be worth it just to give it a try, can’t hurt.

So all in all there’s quite a bit to this jacket but I think it is all doable.  So lastly, here’s the picks of the fabric!

The fleece, the lining fabric, the water-resistant contrast fabric in olive, and in black.

The collection of zippers!  I have a 30” double seperating parka, 2- 9” sport for the hand side pockets, 2-7” sport for the upper chest pockets and 2-14” purse zippers for the Pit-Zips!

2 bungee cord stops along with some cord elastic (Hancock does not sell the thick elastic bungee cord, according to the manager there) and some gross-grain ribbon for all the loops, pulls, and neck band.

Now…it’s on to the pattern edits!