I have the results of my MRI and it doesn’t look good.  I’ve posted the image, mostly so you all can be as grossed out as I am over this. 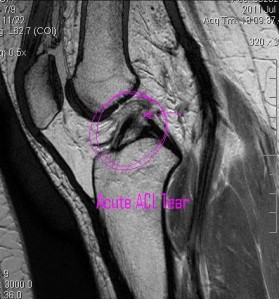 I circled the area that was of great concern to both me and Dr. Kim.  It shows the ACL (thanks to my Google Medical Degree I can use that term with confidence now) torn from the femur.

Normally we should see a black band (the tendon) going from the front of the tibia (you can see that) all the way up and attaching to the back of the femur bone.  The impression results from the report calls this an Acute ACL Tear.

Is tear (ripped) and tear (to cry) the same? In the English language there are two meanings to this word, and if a person could tear up while trying to comprehend a tear then that is precisely how I felt.  It’s the worst of news, well, the worst that I could have heard anyway.  I know it really could have been like a lot worse, such as a broken leg but I would have known that by now.

Dr. Kim was very surprised by the findings as he didn’t think my leg was all that bad when he examined it.  In fact, the area he thought was sprained (which it was) has all healed up and doesn’t hurt anymore.  In the report they called this a Level I to II Medial Collateral Ligament Sprain (MCL).  Even though that’s all healed they still could see that on the MRI…so that is amazing.

The other big thing that showed up was this tear in the meniscus.  This came off the bone when the ligament tore up.  You can see the arrow pointing to what sort of looks like a black circle.  The black circle should be connected to the black triangle next to it.  So basically there is this cushioning material that is just flapping around down there…and I’m sure that is what is causing a lot of my pain.  And this is what was the cause of the blood and some of the swelling.

There were some other things that showed up like blood and bruising in the bones and typical swelling but those two were the biggies.  Dr. Kim said I’d live.

That’s all I needed to hear.  I’ll live people!

But if I want to be active I would need to have surgery to completely overhaul the tendon and clip/smooth out the meniscus.  Friends, we all take walking so very much for granted!

Anyway…I had to make some decisions whether to have a cadaver tendon (just grosses me out just thinking about it) or to harvest a tendon from my own body (grosses me out too…but not as much).  I chose the harvest.  I mean, what the heck…it is almost the harvest season right?  It’s apropos! (sick).  A little humor friends…have some humor!

So surgery is now scheduled for August 30th and there’s a list of 101 things I need to do to prepare prior to the reconstruction.  I’ll post more about that later but one thing I MUST do is sew up a little Crutch Clutch for my crutches.

That was something I could have used during my initial convalescence, but instead used my quilted ruck sack — badly in need of repair.  I think together we can work out a good design don’t you think?