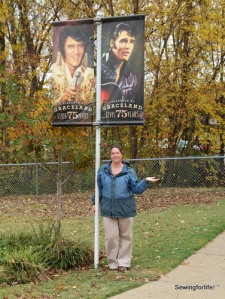 We visited Graceland today, the home of Elvis Presley.

We first toured the house, so interesting but surprisingly normal!  For all his flashy stage wear his home was modest (considering all the millions he had!).

I wondered why he bought this property when he probably could have built anything he could have imagined.  I guess at the age of 22 and with $100,000 dollars he found this beautiful old southern colonial on 13 acres and just felt it was home. 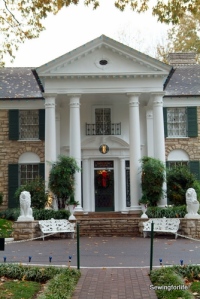 This was home for the rest of his life and through the years he added on to the house to increase the size.  His growing awards and recognition needed more space so he turned a patio into a whole addition just to house his records and trophies…of which I know I’ll need to make another post because there are some sewing notables that I’ll need to tell you all about!

But the outdoors and inside the house were decorated for Christmas. 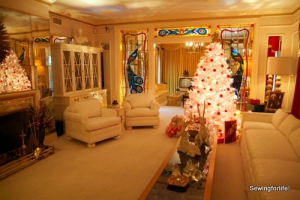 What a great time of year to come!  There were poinsettia’s up the staircase and two Christmas trees inside the house.  One in the living room and one in the dining room.  The tour guide said that was just exactly how it was for the family.  From what I read we are supposed to be looking at a time capsule of how the house looked in the year that he died.  Lisa Marie was about 10 years old at the time, coincidentally I believe we are about the same age!  So anyway…the presents under the tree reflect that there was definitely a child in the house. 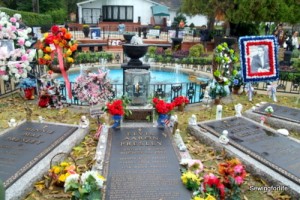 Outside near the pool was a meditation garden where Elvis, his parents and his Grandmother are all buried.  This was odd to me.  Why was he buried so close to the house?  I dunno…just a little creepy in my opinion but I guess if you’re the King you get buried wherever you want and wherever the people can come and worship you, no?

Anyway…there was a lot to see and I’ll post later about some of the costumes and fashions we saw…oooh!  and I actually spotted a SINGER advertisement…stay tuned…really interesting.

We are off now to visit the Clinton Presidential Library complex in Little Rock and right next door is the Heifer International headquarters, something my cynical self now is wondering if I actually bought a buffalo or if I bought an office the last time I donated to this organizaiton…but that is for another post!