The String blocks are up next.  This is a photo of what two string blocks sliced on the diagonal and then re-sewn back together will look like. 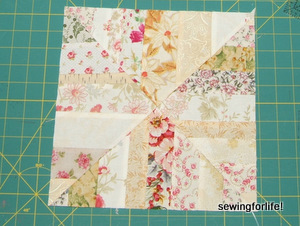 We need 30 of these units for the quilt which means we have to make 60 smaller string blocks that measure 8-1/2″ square.

After I had completed about 6 string blocks I was running out of strings on hand and I found myself cutting strips.  Yes, I had to cut strips!  Uggh!

At first I was trying to be fairly accurate but after a few strips I had to ask myself “self, why are you being so accurate?  These are just going into string blocks…just hack away!”.

So I folded the fabric in half so I had 4 layers and just used my scissors to cut apart my really wonky strings.  It was a lot faster and I felt better.

Then as I was going to start sewing these to the foundation papers…as described in Step 3 of the Roll Roll Cotton Boll Mystery Quilt project I thought to myself once again, “self, can’t you just sew all these strips together and then cut out the block?” YES!!!  So that is what I did…

Oh!  Life was getting really great! 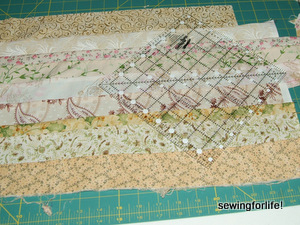 In what was becoming a very cumbersome step in this mystery now has me thinking I’ve got a great way to make it go much faster! 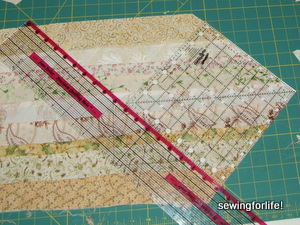 This is what I did.  As I said, I first sewed the strings together.  These were cuts made from full yardage of a lot of different fabrics.  In the photo I picked out about 8 different neutrals.

I sewed until my strip unit measured a width of 13 inches.  That was important because I needed to make sure my 8-1/2″ square would fit on point with enough wiggle room to center a strip in the middle! 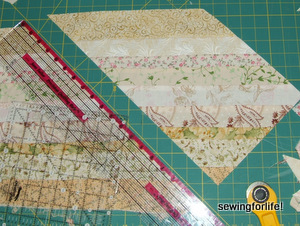 And with a longer ruler cut again.

And then used the 8-1/2″ ruler to cut out 3 blocks!  There were also side triangles that with just an added center strip sewn together will yield another 3 more blocks! 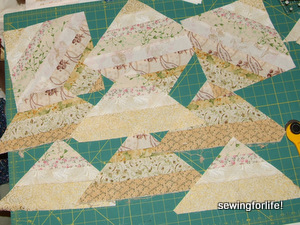 So all told, I can get 6 blocks VERY FAST from this technique.

And of course there are a few side scraps that can go back into a crumb or a string bag for the smaller sections. 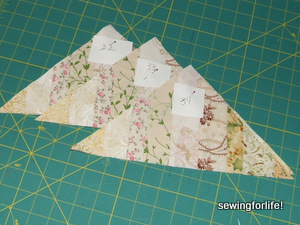 Still sewing…should have these blocks knocked out by the end of the week!

1 thought on “Quiltville’s Roll Roll Cotton Boll – Part 3,The String Blocks and How I made these in a jiffy!”